on July 05, 2013
There are so many quick fix philosophies that surround us daily. And all these “quick fixes” produce the same short-lived results and often no results at all.

Stephen R. Covey wrote  The 7 Habits of Highly Effective People: Powerful Lessons in Personal Change; to help us with what he calls a "Paradigm Shift”— a change in perception about how the world works.

Covey says, if you work hard at acquiring these principles, if you learn them well, think about them deeply and teach them to others, they will eventually become internalised.

Here are some of the quotes from the book to help challenge your mind:

When we open our mouths to describe what we see, we in effect describe ourselves, our perceptions, our paradigms ~ Stephen R. Covey

What we are communicates far more eloquently than anything we say or do~ Stephen R. Covey

We see the world, not as it is, but as we are──or, as we are conditioned to see it ~ Stephen R. Covey

You will always reap what you sow; there is no short cut ~ Stephen R. Covey 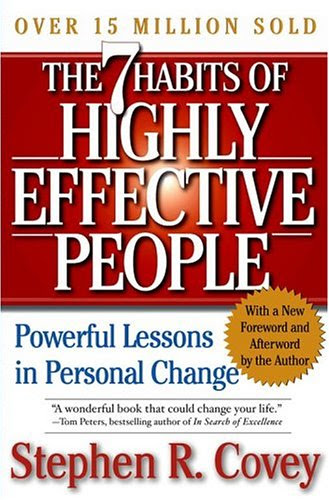 Many people with secondary greatness - that is, social recognition for their talents - lack primary greatness or goodness in their character ~ ~ Stephen R. Covey

If you don't let a teacher know what level you are -- by asking a question, or revealing your ignorance -- you will not learn or grow ~ Stephen R. Covey

The commitments we make to ourselves and to others, and our integrity to those commitments, is the essence and clearest manifestation of our pro activity~ Stephen R. Covey

Taking initiative does not mean being pushy, obnoxious, or aggressive. It does mean recognizing our responsibility to make things happen ~ Stephen R. Covey

Create a clear, mutual understanding of what needs to be accomplished, focusing on what, not how; results not methods. Spend time. Be patient. Visualize the desired result ~ Stephen R. Covey

We are what we repeatedly do. Excellence, then, is not an act, but a habit ~ Stephen R. Covey

The Seven Habits are not intended to be individual formulas that we can just apply and be "better". Stephen Covey says that like the normal laws of growth the seven habits build on each other to create personal and interpersonal effectiveness.

You can buy the book from Kalahari.com
Business + Leadership The 7 Habits of Highly Effective People: Powerful Lessons in Personal Change